This likely applies mostly to the F355 crowd (due to popularity) but technically also applies to the 550, 456 and Mondial T as the shocks have the same active damping system…. 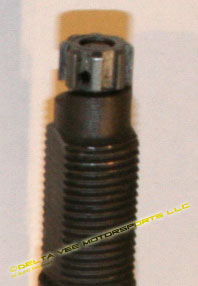 I have a number of customers that have disabled the OE Ferrari/ Bilstein active damping system by at the least removing the red-top solenoid motors (and in some cases the computer, wiring, etc.) and manually adjusting the shocks by turning the little gear on the end of the shock rod. The following is my advice when choosing this tuning method:

Primarily because of the nature of the system design, the fact that it’s a little motor turning the damping control gear, that the system must be responsive in real-time or it’s worthless, the gear rotation from full hard to full soft is less than 90°. To eyeball a setting and lock in place is then exceptionally difficult to match left and right side dampers.

The nature of the Bilstein design is that the gear attaches to a 4mm shaft concentric with the 14mm shock rod, turning a valve of sorts that controls “bleed” or hydraulic fluid bypassing the shim stack on the main shock piston. When set wide open a huge amount of flow is allowed past the main shim stack, hence the damper has a huge HUGE range of damping force available.

If you glance at the WSM, it has a simplified graphic display of damping logic, degrees rotation of the gear vs. road speed. The system also uses other inputs to determine gear position so ultimately the damping program logic graphically would look like a 3-D carpet of sorts akin to an ECU program. You’ll notice that the gear never rotates to 90° and never to 0°.

I would say that due to the limiting factors of either hardware (sensors/ actuators) or software or both is the reason the damper is never full soft or full hard. Hence Ferrari specifies that Bilstein builds shocks that if run full hard (no bleed) the suspension is over-damped.

What does this mean?

If you run your suspension over damped it takes longer for the tire to recover from either a sudden input like a bump or a slower input like braking/ turning into a corner or accelerating out of a corner. If the tire’s slow to recover simplistically stated it’s spending too much time up in the air (literally or figuratively), you’re missing out on maximizing contact patch time on the tarmac.

Re-engage the active damping system. If you have a F355 Challenge make certain your shock ECU is the updated version distributed in 1997 iirc.

If you desire a change in damping this can be accomplished with a re-valve. Sure it’s likely that the ECU can be altered but I don’t know of anyone who’s reverse engineered and reprogrammed….

If you want to just test what more damping will do then of course manually lock the adjuster and test, but know that under certain situations on track that damper setting may actually be slowing your lap times.

This is an exceptionally well thought out design, arguably state of the art in the 90’s.

As a post script, I’m working with Bilstein to adapt a manual control that will allow much greater resolution in the adjuster mechanism but it’s a ways out before it will be available.

Finally, if you’re interested in active suspension for your car we can build a system for you that incorporates accelerometers as the active damping input, tailoring the shock millisecond-by-millisecond to exact conditions (bumps, straights, corner exit different from corner entry…). Call us now for details!