So what happens when your Spec Miata Biltsein shocks are impounded by the technical inspection team, either post qualifying or post race?

Here’s a primer for what to look for when your dampers are getting tested and you’re sweating, not knowing if your championship finishing position will stick or you’ll be penalized as there’s a ton of internet lore and misinformation regarding shocks and suspension technology.

The shock dynamometer results are very much effected both by the equipment used and the user himself. Here are the things to look for, document with notes and or photos if possible:

First question to ask yourself is if you have a printed copy of the Spec Miata Bilstein shock performance specifications? If not then you’re forgetting a pretty important document, don’t you think? Here’s a link to the SCCA Spec Miata shock specifications. (Link to NASA version )

A friend of mine was on the technical group to determine these specifications and he quickly outlined the process as gathering a dozen or so new shocks, testing all of them, tossing out the shocks with outlying performance and averaging the remaining data in the group, then adding a certain performance margin. I agree that method yields specifications for which most shocks should then comply with once tested in the field. But as I stated earlier, the dyno test method is vital to good data.

MOUNTING THE SHOCK IN THE DYNO

The SCCA and NASA has also published guidlines for how the shock dynamometer should be operated, taken verbatim from Roehrig Engineering:

Running a test on Scotch yoke dyno.
1. When you are ready to collect data, click on Test in the pull down menu and then click Perform test.This will bring up the Perform Test window.
2. Select your test profile and click edit if you wish to make any changes.
3. At this time be sure the dyno is at bottom dead center.
4. Hang the shock damper from the upper clevis so that it is not touching lower clevis.
5. Click the “Zero Load Cell” button to zero the load cell and take the weight of the shock out of the data.You can verify the results by looking at the live force reading. This is done to eliminate any difference in the damper weights, the weight of the damper would be interrupted as a compression force.
6. Lower the cross bar and connect the damper to lower clevis.
7. Tighten the clevis handles by turning clockwise until brass button in clevis seats against shock eye. This is done to remove any free play in the damper ends. If pin type clevis are used in rubber bushing dampers care must be taken to tighten clevis exactly the same amount. Preload on rubber bushed dampers can have a large effect on the data. REI recommends our c-clamp type clevis to eliminate any bushing deflection.
8. Pull cross bar down a minimum of ¼ inch to pre-load damper and tighten clamps, this is done to prevent the damper from bottoming out in extension.
9. The program, by default, is set to do an automatic gas test to measure and record the gas force in the shock. If you have changed this setting to do a manual gas test, click “Gas Test” record the gas force. Gas test should be run on all dampers so the test is consistent
10. Connect the temperature sensor to the damper body. Skip this step if you have a non-contact (IR) temperature sensor. Damper should also be warmed up to a specified temperature. Be aware that twin tube dampers might have a difficult time with a temperature warm up because the heated oil is insulated from the temperature sensor by the outer camber.
11. Click “Start Test” to begin the test. 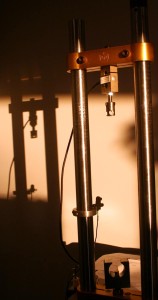 ITEMS TO NOTE
Here’s where things can get out of whack:

If the weight of the damper is not “zero’d” out, the damper mass will contribute (additive) to compression force values, skewing the data.

I use 100°F, most guys do the same or perhaps warmer, this effects damper oil viscosity, thinner oil, less force developed. If the shock is tested at ambient temperatures without warming then the data will show that the shock develops more force than it does while you’re driving. On the car damper temperatures are easily 150°F or greater dependent upon the circuit.

If a pin is used to mount the shock through the lower mount bushing then the spring response of the rubber bushing is included in the damper data, skewing the data.

Here’s our video of the correct lower mount clevis:

Also know that dynamometer software processes the data to aid readability. The software may also condition the data to visually look pretty by averaging and conditioning the raw data into something looking like it came out of an Excel spreadsheet; the lines are too straight, the readout may only display one compression and one rebound force vs velocity line instead of two for compression and two for rebound as the damper develops different forces as it transitions from compression open to compression closed and the same in rebound.

BE AN INFORMED COMPETITOR! Know what the rule book states and don’t be shy about protesting the results, but be prepared to offer evidence that test procedures were questionable; no one wants to lose qualifying or finishing positions in the tech barn!

Spec Miata racing is about the most popular form of road racing competition in North America, primarily sanctioned by the SCCA and NASA; low operating cost, reasonable cost to build or buy a car and a pretty tight rule book is the formula for popularity… but you knew this already, right?

Interested in new Bilsteins for your SpecMiata? We have: