I have Penske doubles. I vary bump and rebound to suit the track, but I always set my canister pressure pre-race weekend at 150 psi. 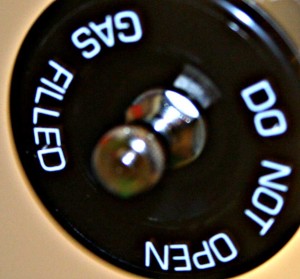 Use a special nitrogen inflation tool to adjust shock pressures

You can use it as a tuning tool but first must wrap your mind around what it’s doing and how.

Ostensibly for reducing/ eliminating cavitation, the nitrogen chamber also acts as a spring.

You can both calculate and measure the force (also called “nose force”). Cheap way is to wedge a bathroom scale between the shock rod (sans spring) and rod mount in a way in which the scale reads only the rod force but not the weight of any component. Calculation method is by knowing chamber pressure (150 psi), area of the floating piston and the area of the shock rod. Subtract shock rod area yields the rod force.

So increasing charge pressure adds a lifting force that acts like a very small air spring, typically with low/ light spring rate. This may also change your static ride height.

Some like to “tune” the rod force to match un-sprung weight, that’s just one “theory”. Some like to “test” what a spring change will feel like or if a spring change will yield an improvement by making a quick canister pressure change, then noting driver comments and lap times. It likely would take a change to 300 psi for you to feel the difference.

Also know that rod force is additive in compression in that it adds to the spring force, then the opposite occurs in rebound.

Autocross guys having been “degassing” their shocks for years and claim an improvement in times.

I would not drop below 80psi and not above 300psi.

You won’t learn anything by not trying it, right?